Editor’s Note: This is the third installment of a five-part series that explores the past, present and future of the confrontation between Russia and the West on the Eurasian landmass. Part one explored the origins of the conflict and part two examined Ukraine, caught between East and West.

The competition between Russia and the West has been played out heavily in Ukraine throughout history. But that is just one part of a much wider swath of territory in Eastern Europe that has been caught up in the great rivalry. Today, this territory consists of Belarus, Moldova and the Baltic states of Estonia, Latvia and Lithuania.

Each of these countries has chosen its own path since the fall of the Soviet Union. Some have remained staunch supporters of Russia, others have enthusiastically embraced European institutions, and others still have shifted uncertainly between the two. In the next quarter century, the countries of Eastern Europe will begin to coalesce, forming a new regional bloc that will pool the economic and military strength of its members.

The story of Belarus is similar to the story of Ukraine. Belarus was first drawn into the Russia-West rivalry because it belonged to eastern Slavic state of Kievan Rus. After the collapse of Kievan Rus in the 13th century, the Grand Duchy of Lithuania pulled Belarus into its domain, which later became the Polish-Lithuanian Commonwealth. The Poles and Lithuanians ruled Belarus for hundreds of years, until the commonwealth broke apart amid the Partitions of Poland of the 18th century. Belarus then joined the Russian Empire and, after a brief period of independence following the Russian Revolution, the Soviet Union.

The Baltic states followed a somewhat different path. Neither Estonia nor Latvia was a part of Kievan Rus. Instead, they were incorporated into the various Scandinavian and Germanic empires that existed throughout most of the Middle Ages. Lithuania, on the other hand, was a power in its own right: It began as the Grand Duchy of Lithuania in the 13th century before merging with Poland to form the Polish-Lithuanian Commonwealth in the 16th century. Like their neighbors, all three Baltic states became part of the Russian Empire and, eventually, the Soviet Union.

Moldova can also trace its roots beyond Slavic territory. Moldova began as a part of Romania, and by the time it was absorbed into the Russian Empire at the turn of the 19th century, it had not yet formed a cultural or political identity of its own. Russia promoted Moldova’s assimilation through an extensive Russification program, setting Moldova apart culturally and politically from Romania. Though Moldova briefly returned to Romanian hands after the Russian Revolution, the Soviet Union later reincorporated it into Russian territory during World War II.

The Past 25 Years: Tangled Alliances

Since gaining independence after the fall of the Soviet Union, Belarus has had a relatively steady foreign policy agenda. Belarusian President Aleksandr Lukashenko, who has kept his grip on power since winning the country’s first presidential election in 1994, has maintained many elements of the country’s former Soviet structure, including the extreme centralization of power within the executive branch and an economy dominated by the state. Lukashenko has also continued to promote close economic and military integration with Russia; his country is a member of the Russia-led Eurasian Union and the Collective Security Treaty Organization military alliance. Belarus and its leader keep their distance from the West and have avoided integration initiatives such as the European Union’s Eastern Partnership program. Belarus has even participated in joint military exercises with Russia near Europe’s periphery. And, while it is true that Lukashenko has helped mediate talks between Russia and the West since the crisis in Ukraine broke out in 2014, Belarus remains steadfastly aligned with Russia. 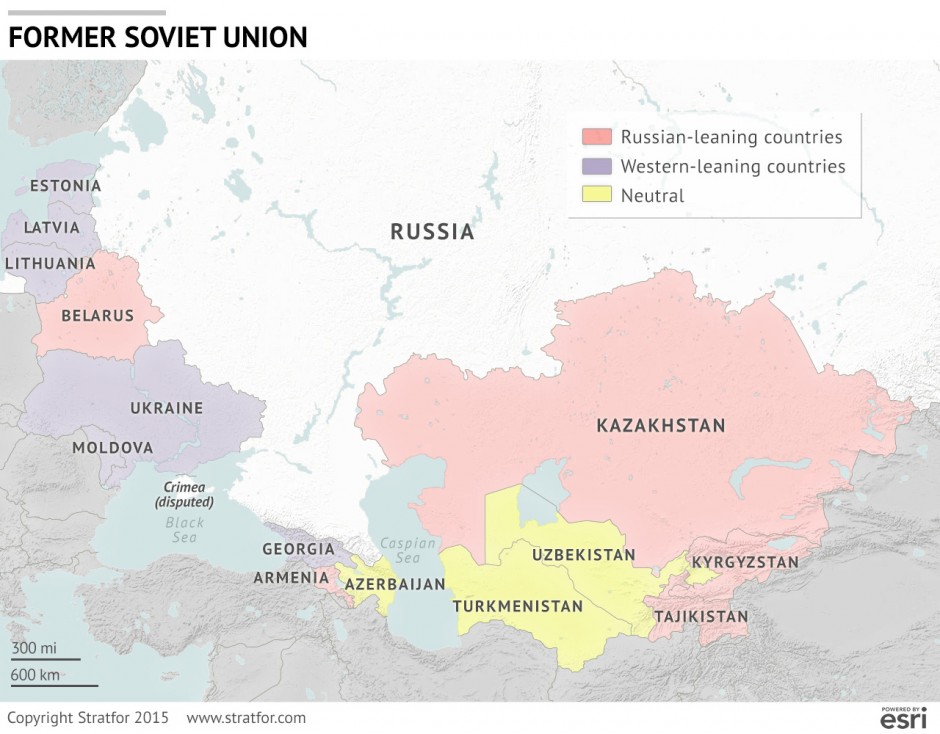 The Baltic states, on the other hand, have adopted a resoundingly pro-West stance since the Soviet Union’s collapse. Almost immediately after gaining independence, Estonia, Latvia and Lithuania began the process of joining the European Union and NATO. In 2004, they became members of both blocs. All three are part of the eurozone and support a NATO buildup in their territory to deter Russian aggression. Despite the presence of Russian minority populations, through which Moscow exerts its influence, the Baltic states have maintained close ties to the West.

Moldova, marred by political instability stemming from deep divides between the country’s pro-Russia and pro-West factions, has wavered somewhere between Belarus and the Baltics. Immediately after gaining its independence, Moldova descended into armed conflict between security forces and separatists in the pro-Russia region of Transdniestria. The conflict enabled Transdniestria to break away from Moldova, and Russia continues to support the region militarily and economically to this day. Meanwhile, Moldova is struggling to form a coherent foreign policy because of the deep political rifts that remain in place. The Russia-leaning Vladimir Voronin led the country from 2001 to 2009 before being toppled during a pro-Europe revolution. Voronin’s ouster brought in the pro-West Alliance for European Integration government, which has been so mired in political disputes that it has collapsed several times within the past five years. Now, a weak interim administration governs Moldova, and the country’s political system remains split between pro-Russia and pro-West forces.

The Next 25 Years: Tightening Regional Ties 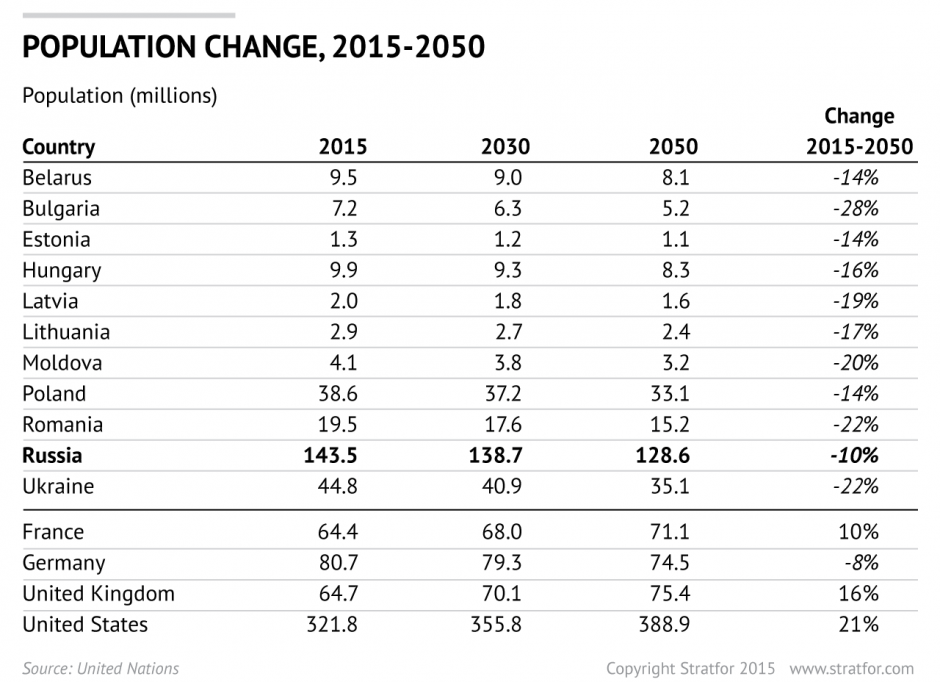 Such demographic change will reshape these countries’ economies and politics as well as their foreign policy orientations. As their populations shrink, Eastern European nations will be forced to forge partnerships to avoid economic downturns and to protect themselves from external threats. In fact, they have already begun to do so. Belarus has tied itself to Russia, the Baltic states have aligned with Europe, and Moldova (with the exception of Transdniestria) has sought to meaningfully integrate with the West. In the coming quarter century, the goal will remain the same, though how Eastern European countries achieve it may change.

Belarus’ unwavering loyalty to Russia may come into question in the next 25 years. Its orientation has been defined by a single administration that is heavily centered on one personality: Lukashenko. His successor could easily choose a different course. As Russia struggles to address its own demographic decline and with a new generation of Belarusians with fewer ties to the Soviet era moving into positions of political leadership, it is possible that Belarus will join the pro-West camp. The growing availability of non-Russian energy supplies, especially via liquefied natural gas import terminals in Poland and the Baltic states, will ease Belarus’ dependence on Russia in the long run.

As with Ukraine, this will not necessarily lead to Belarus joining the European Union or NATO. Instead, the country could move to strengthen ties with its neighbors, potentially creating a bloc similar to the Polish-Lithuanian Commonwealth that includes Ukraine and the Baltic states. The United States, because of its own long-standing interest of containing Russia, would likely support such a bloc, giving countries like Belarus even more incentive to join.

The formation of an Eastern European alliance would be particularly attractive to the Baltic countries, which will be collectively populated by only roughly 5 million people by 2050. By joining forces with Poland, Belarus and Ukraine, this figure would rise to at least 80 million people. In this way, the Baltic states could overcome their small sizes and deter Russian interference in the region.

Moldova will need the security of a collective economic and military union too, since it is also facing a steep demographic decline. While it is possible that Moldova could rejoin Romania, whether officially or in a de facto sense, Romania’s demographic troubles are shaping up to be even worse than Moldova’s. A new Eastern European bloc might therefore appeal to both countries, which share other potential members’ proximity to and fear of Russia. Members would also have other similar priorities, including the diversification of their energy sources and the weakening of Russian influence in the European borderlands.

A potential Eastern European bloc composed of Belarus, Ukraine, Moldova, Romania and the Baltic States would have a population comparable to Russia’s in the coming decades. Economically, it would likely be more advanced and sophisticated than Russia. The gap between the two would only grow as Russia’s position as the region’s dominant energy supplier weakens over time. Militarily, the bloc could be capable of defending itself from Russia if it received support from the United States. Given Washington’s long-standing interest in countering Russia’s power plays, this would not be an unlikely scenario.

Of course, Russia will not be forced to retreat completely behind its own borders. It will continue to be an important player in the region, especially in Belarus and parts of Moldova, where its cultural ties are strongest. However, this affinity will be overshadowed by the economic and military integration taking place within Eastern Europe, making it far more difficult for Moscow to extend its influence there. Meanwhile, the region will shift further toward the West over the next 25 years, forming a highly integrated bloc of like-minded countries that will help to shape the Continent in its own right.